The 13th edition of the Elles Tournent Dames Draaien, also known as the Elles Tournent festival, is currently underway and running until the 29th January 2021. The full lineup you can view here via Festival Scope as the festival promotes films by women directors from all over the world and currently have over thirty films, from feature to short, live-action to animated, available to watch for free (few films however can only be viewed in Belgium/France). Below are three short films I’ve reviewed from the They Come To Life section of the festival. 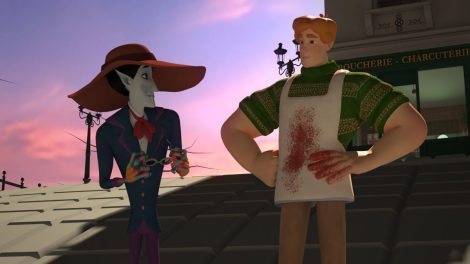 When the night is up, the ashamed vampire goes up to the butcher shop where the owner welcomes him and reconciles him with his nature. A tasty toast follows.

A Pleines Dents, aka Full Teeth, is Laurène Feenandez’s graduation film from an Estienne school in Paris where she studied 3D animation. The short opens with the vampire patiently looking on at the butcher shop across the road from the cemetery, eagerly awaiting for the sun to come up so it can open. Dressing so that he went burn up from the sun, the vampire ventures over to order some meat, where the owner admits to knowing what he is but treats him the same as he would any other customer. The computer-animation style felt reminiscent of the old ReBoot series for me, with some nice touches (mirror reflection) and the score from Gustave Carpene is very good too. I only wish it was a little bit longer.

At 85, she’s wakened by her usual alarm. We see her through her routine. A surprise visitor comes at the door. Quick, she powders her nose and open the door to the… Death. She invited her in happily…. What comes next?

Not Today is the directorial debut from Marine Jacob, who studied at the École nationale supérieure des arts visuels de La Cambre (ENSAV) in Brussels. The film focuses on an eighty-five-year-old woman, waking up and going about her normal daily routine, just appears to be lonely. When someone…or something knocks on her door, she suddenly brightens up and starts to get ready before opening the door to the grim reaper himself Death. What follows then is an amusing montage of Death trying to collect another soul but is constantly stopped with the elderly woman’s antics, from dancing to painting to doing makeup on Death. I really liked the style of animation as well as the antics that followed in the five minute short, the music from Olive Musique, Studio Le Bus works effectively with the animation and I thoroughly enjoyed the reveal at the end. 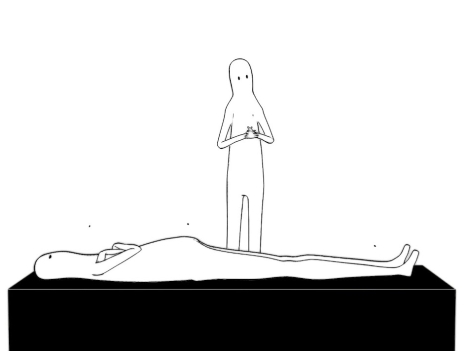 A dead man engages in a dialogue with himself in order to come back to life.

Graduating from Ecole Estiennce and Gobelin in 2019, this animated short marks Louisa Lesage’s directorial debut. The short follows a man in the after-life after he’s attempted to take his own life. Finding himself in this blank, cold reality, he’s gripped by his inner demons and begins to have a dialogue with himself in order to fight to come back to life. Lesage paints very effective imagery with her animation style here, particularly when the man has a dialogue with himself talking about being boxed pre-birth and in death, and it’s in the moments of the regret in fear that the imagery along with the musical score becomes impactful, with a moment of solace in its final moments.